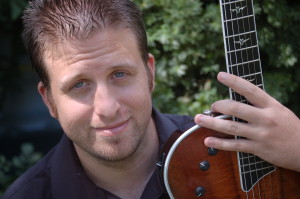 David picked up the guitar when he moved from his hometown of Phoenix, Arizona in 2001 at the age of 19 and hasn’t looked back since. Ten years and countless hours of practicing, performing and teaching later, David plays at multiple venues in the Kansas City area while teaching from his studio at Guitar Dock in Lenexa, KS and rom his home studio in Raytown, MO.

As a guitarist David is motivated primarily by his passion for storytelling through  music. Growing up he was inﬂuenced by classical, jazz, and ﬁlm scores. Since picking up the guitar David has been inspired by guitarists from such diverse backgrounds as Eric Johnson, Robben Ford, Pat Martino, Tuck Andress, Martin Taylor, and James Taylor. Today David plays and teaches a variety of different styles, ranging from rock and blues to classical and jazz.

David studied classical guitar with Christopher Parkening protege Douglas Niedt, chair of the UMKC Guitar Department. He has studied jazz guitar with KC jazz guitarists Jay EuDaly and Danny Embrey. He has taught guitar privately for over fifteen years. David strives to give his students the conceptual and musical awareness necessary to master the instrument to their maximum potential. He stresses musical versatility and understanding the big picture. He uses “The Vertical Truth: Chordal Mechanisms for the Guitar”; a curriculum based upon material gleaned from KC legend and jazz great John Elliot. as well as other resources to supplement his students furthering education.